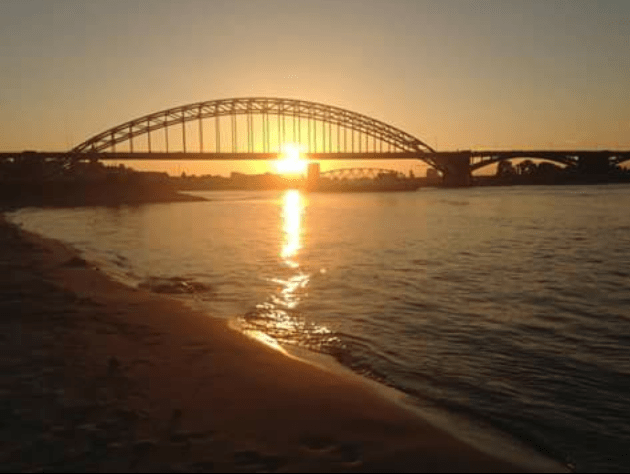 My initial preconception of the Netherlands was that, it was in any case, an enlarged version of Center Parcs. On the whole, I think this was a very thorough analysis given the wealth of forests, the abundance of Dutch pancake houses, and most importantly, the Dutch’s incessant reliance on bikes as the main means to get anywhere, literally ANYWHERE. I wouldn’t in fact be surprised if, on her wedding day, the Dutch bride swept elegantly down the aisle seated upon a rusty old bike, back-pedalling to break as she fell upon the alter to greet her husband (who had arrived only moments earlier, on a moped he had nearly crashed whilst trying to overtake three gossiping girls on the cycle lane).

I arrived in Nijmegen directly from London, completely overwhelmed by the length of the queue to pick up accommodation keys, and surprisingly enough being told to ‘sit in line’ for four hours was not the warm welcome I had hoped for. But it was made more bearable by the company of other Internationals who were also rather bewildered, some of whom had been travelling for two days straight. I knew absolutely no one in this strange if not slightly ‘behind the times’ City, so I battled through my hunger and tiredness (and self pity), and decided to take on the role of the overly social, somewhat annoying international on my quest for friends – just one friend would have sufficed for the day.

Within half an hour conversation in the queue was taking off, and talk among the cohort turned to the Dutch obsession with their bikes. And no, this was no ordinary conversation about cycling to and from Uni, or to and from the town. I asked, rather naively in hindsight ‘So, are there Ubers we can catch home from the clubs? I mean I have the app and there doesn’t seem to be any nearby right now…but maybe in the evening there will be?’. There were blank faces among the newly assembled squad, but one gentlemen appeared to have the answer. He enlightened us all that ‘Dutch people cycle everywhere, literally ANYWHERE’ and that there were no exceptions to this rule, and we would just have to get on with it, we would be cycling home from our nights out before we knew it. I mean, I should have known this, but I didn’t quite realise the extent of the culture shock, and no Uber? Well, I knew the Dutch were different, but not that different.